Extended: similar to Enhanced, but with a 16:9 aspect ratio, suitable for HDTV and cinema (Note: Works with Matlab esfrChart)

All inkjet charts are available in either Visible or Near Infrared and Visible for testing cameras sensitive to wavelengths between 700-1000 nm. Specific spectral data available upon request. We currently offer these charts in inkjet format, with Enhanced versions available as photographic prints. All Imatest ISO 12233 eSFR charts are fully compliant with the ISO standard. The Imatest eSFR ISO module provides highly automated support for the new charts. Additional details below. Download PDF Info Sheet

* As measured to the outside of the black border.

The Enhanced and Extended Versions are also available with Extra Wedges. For higher megapixel versions of this target: click here.

The Imatest Enhanced ISO 12233:2017 eSFR chart has all the features of the Standard chart, keeping the 3:2 aspect ratio, with the addition of six added slanted squares for measuring performance near the image boundaries and hyperbolic wedges for visual analysis or analysis with the eSFR ISO module. It also has 16 color patches when produced with technologies that allow color. Since these additions are in regions of the chart not covered by the standard, compliance with the standard is unaffected. The Enhanced Version is also available with Extra Wedges. Maximum Wedge Frequency of 4000 LW/PH is better for higher resolution camera, but it is only available with the 4x size chart.

A 20-patch OECF grayscale pattern* is used as opposed to the 16-patch version.
The Focus Patterns in the centers of the squares are rectangular (to increase the MTF measurement area) and are designed to reduce interference with automatic edge detection.
There are four registration marks instead of three to facilitate automated region detection. (Four features are required for a projective transform.)
An additional mark above the lower-left registration mark is used for detecting chart orientation.

The differences between the Enhanced and Standard Versions are as follows:

Six extra slanted squares are added for measuring performance near the image boundaries.
Several hyperbolic wedges with spatial frequencies, similar to the CIPA chart referenced in the ISO standard, for visual analysis or use with the Imatest Wedge module.
16 color patches when produced with technologies that allow color (inkjet or color LVT), with colors similar to the industry-standard 24-color test chart.

This chart will work with the fully-automated eSFR ISO module, starting with the Imatest 4.0 release.

The Imatest Extended ISO 12233:2017 eSFR chart has all the features of the Enhanced chart (six extra squares, wedges, and 16 color patches where possible), but has a 16:9 aspect ratio, which makes it suitable for HDTV and cinema measurements (and it also works well with 3:2 aspect ratio DSLRs). It is fully compliant with the standard. The Extended Version is also available with Extra Wedges.

This chart will work with the fully-automated eSFR ISO module, starting with the Imatest 4.0 release.

Megapixel suitability is based on analysis of Modulation Transfer Function (MTF) obtained from a chart image captured using a 1:1 magnification lens (Canon 65mm f/2.8 1-5x macro) and a 6.5µm pixel size sensor (Canon EOS 6D). In order to consider performance throughout the cameras range of expected sharpness, MTF90 (the spatial frequency where MTF is 90%) is weighted at 0.5, MTF70 is weighted at 0.35, and MTF50 is weighted at 0.15. Conversion to megapixels is based on the Imatest Chart Quality Index (CQI) calculation which determines sensor height suitability using the equation 2 * MTFxx (cycles per object mm) * vertical chart height (mm), where xx is 90, 70 or 50. Megapixel suitability calculations assume that (1) the lens is of high quality, (2) that the chart fills the vertical field of view (vFoV) of the camera system, and (3) that the sensor aspect ratio is 3:2. For 16:9 aspect ratio sensors (with pillarboxed framing, if applicable), multiply the megapixel suitability by 1.185. For 4:3 aspect ratio sensors (with left/right sides of chart cropped), multiply megapixel suitability by 0.889. Charts can be suitable for significantly higher megapixel counts if the minimum resolvable feature size of the lens is larger than the pixel size or the chart fills less than the full sensor vertical field of view.

*Please Note: When Matte surface is selected, the OECF 14524 chart does not meet the standard for maximum density. 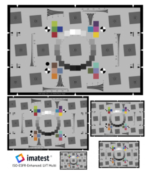 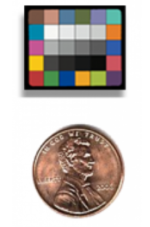 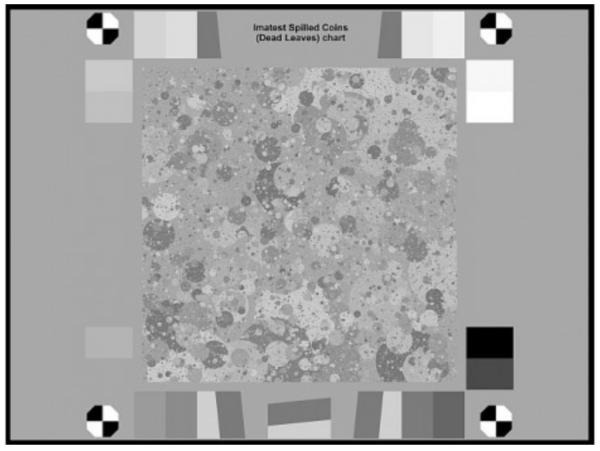